Since early 90s and until the end of that decade there were two undisputed giants making strategy and management video games in the PC world: Maxis and MicroProse. These two companies are behind a practical grand total of the best strategy games, “five minutes/turns more” style: SimCity (1989), SimCity 2000 (1993), Los Sims (2000), Civilization (1991), X-Com: Enemy Unknown (1994)…

MicroProse (at a later stage, good old pal Sid Meier founded Firaxis) and Maxis had a fundamentally opposed nature: the first offered reflexive, long, deep and slow paced products, while Will Wright‘s company designed kind of humorous games of a certain fantasy fashion. I am excited to imagine what could come out of this joint venture. 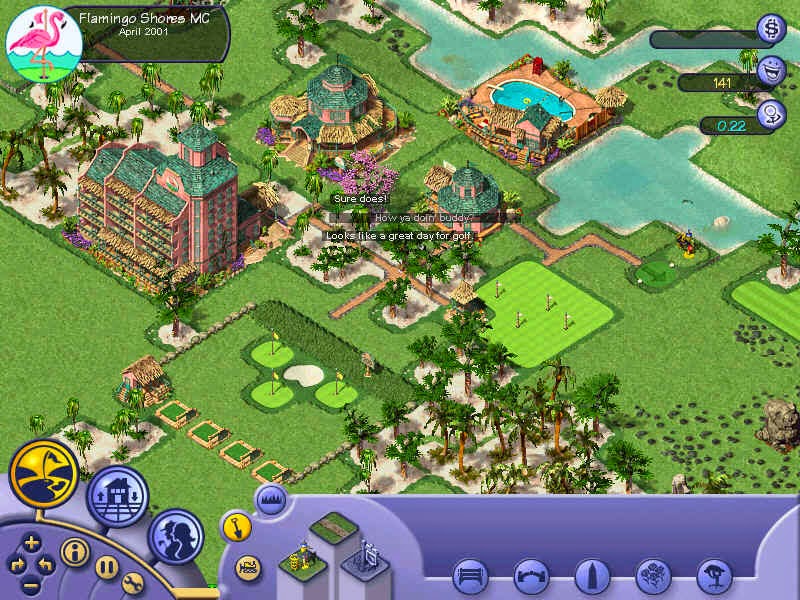 It was 2002 when Sid Meier’s SimGolf came out, produced by Electronic Arts in a time in which the company was engulfing other myth-enshrouded companies. The result is a surprising mix of company management with the loaded people’s sport. Again surprisingly, despite bearing the name of the Civilization saga creator, it is a game not of an excessive complexity, straightforward enough for everyone to play with the funny touches of a Sims game. Everything in a very visual interface, with a golf playability part in the style of role playing games. (you aim and I’ll shoot) 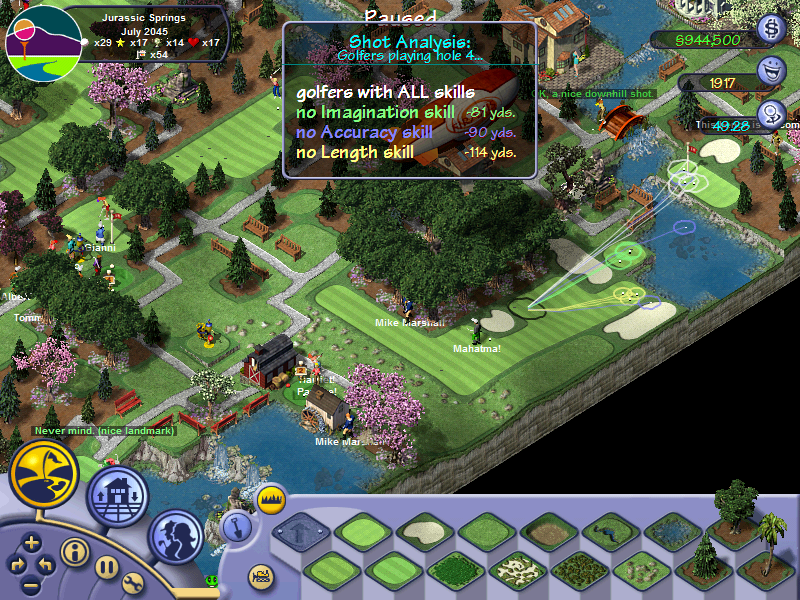 The player has inherited a sum of money which would use to buy a plot of land to make his dream come true: design and build a golf course worthy of the SGA (Sim Golf Association) and winning the million-dollar prize. Everything while juggling budgets so posh people will continue burninig  simolleons in the 18 course. The way to do this is rather simple: we decie the distance between the tee and the green, we add the fairway and decide the difficulty of the hole with hazards and break. Everything while managing club facilities to make our guests stay more enjoyable, as well as the club staff of gardeners and “refreshment” sellers who will walk our paths.

Technology used is not a wonder, even considering it is more than 15 years old at the moment of writing. Its 2D graphics are pleasant and music is very appropriate for the game, but there are very few settings and you can’t even change the 800×600 pixel resolution. You can’t barely change the difficulty, which is not explained at all throughout the game, so it’s unknown to me how does it work or what does it do. It is not possible to expand or mod anything, and does not have any multiplayer capabilities. Its interface is also a nuisance (suddenly it’s your turn to hit the ball, but you are clicking elsewhere to edit a green, so you hit a homerun with the darn ball). It would be acceptable for an early 90s game, but for it sure downplay a 21st century product in an absurd way. 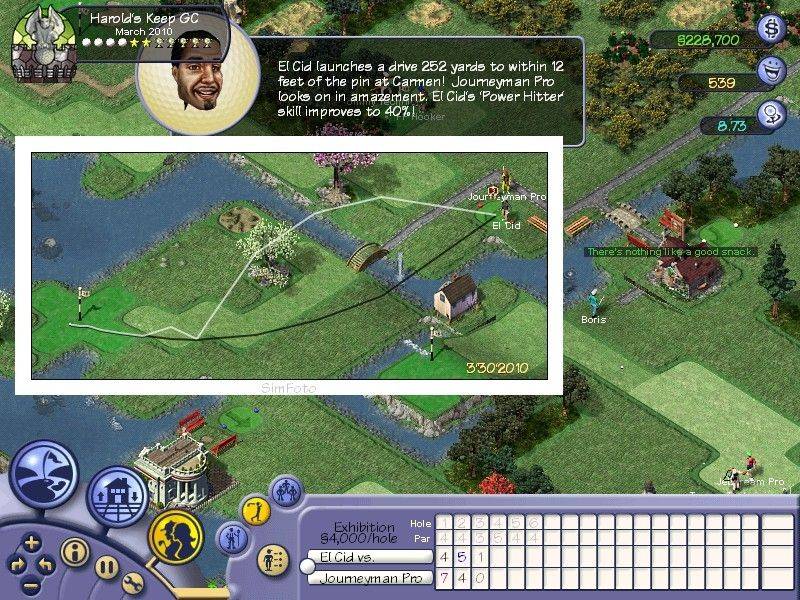 It is true that it has many negative technical points, but the playability is so fun it makes you forget (partially at least) these aspects. It’s not only joyful to build the holes, it’s very gratifying to watch these old fogies trying to carry the blessed-be ball to the hole. That and watching them dropping the simoleons when finishing, whose quantity depends on how fun was the hole itself. We can see them chatting, having “histories” like “my goldfish is ill” or “I saw an UFO” (literally). We have to manage the beverage distribution so they don’t get dry, give them electric carts and deterring them to slack so they play fluidly. 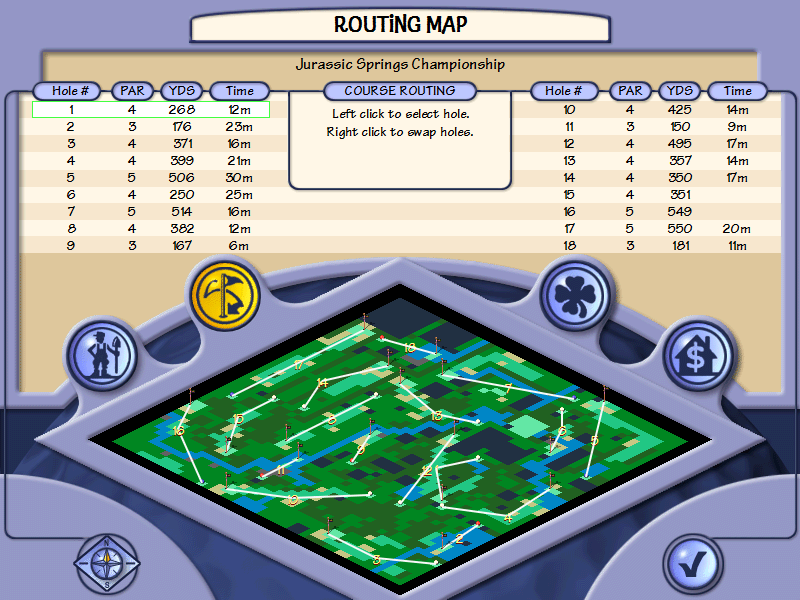 A very fun aspect of the game is the sound. Fitting in a CD is no problem for having many funny sound effects, with multiple details (as playing classical notes in each click building the fairway) or playing Hanna Barbera effects. Musical effects, even when they aren’t a hit, give some colour and contribute to the general ambient of the 90s rich celebrities. Part of its charm is actually the imagenierie of this subculture like the sims-like cartoons. 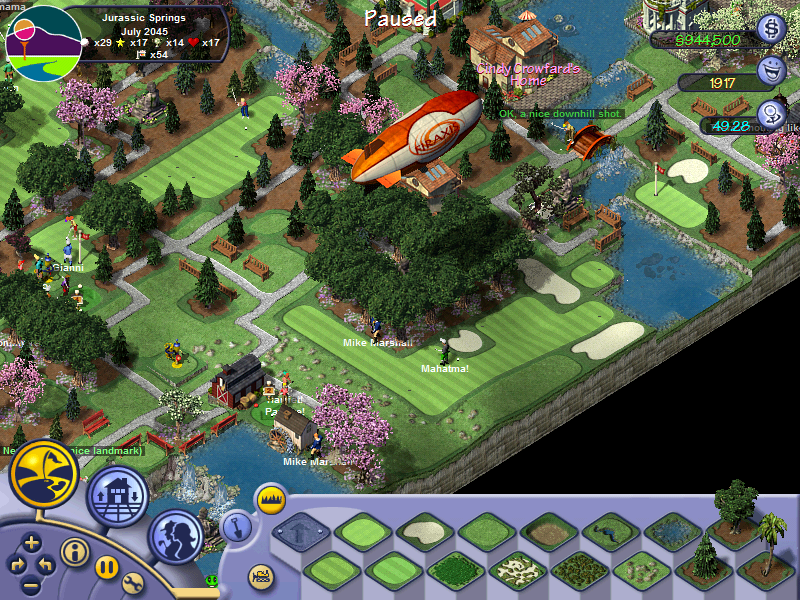 The sporty part of the game complements perfectly the management end, and it’s all the unenforced we like. Of course the vital objective of the main character is to win the course tournament, but we can ignore it completely and just concentrate being a mogul. If we like to play the sport there’s no hurry either, and doesn’t need any special dexterity. In fact it is more in the like of japanese role playing games: the character has some statistics (dive, irons, hook/slice etc.) and we’ll just indicate him the hits to be done. Depending on our abilities the shot would be more or less successful. In the long run we will be able to get better on every aspect of the sports and win the tournament. Well, or get utterly thrashed.

The reception of this launch was colder than a mother-in-law hug. It wasn’t big on news, and people was more worried praising (or giving criticisms) the Sims games, or shooting in some Grand Theft Auto. In any case critics gave mostly positive scores to the game… and player critic was mostly non-existant. As a curious note there was another launch titled SimGolf programmed by Maxis in 1996, which received even less attention. Was this game a second attempt? Beats me. 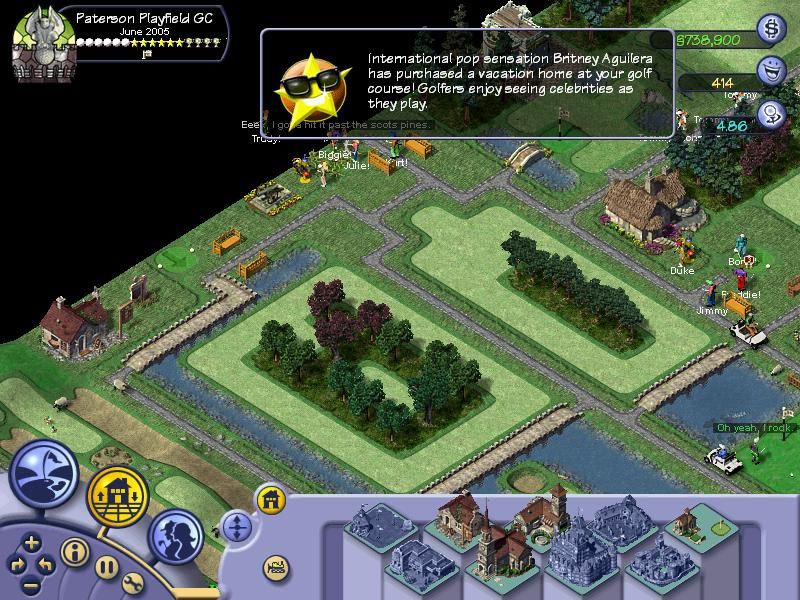 Playing nowadays Sim Meier’s SimGolf is still a fun experience. Graphics are not severely outdated and the only real downsides are the technical problems or the out of date interface, which can be ignored with not a lot of effort thanks to the fun factor. Well, unless you use Windows 10: the damn DRM exploited an operating system flaw that was corrected in Windows 10 and it’s no longer possible to play it “legally” in this operating system. (Hint: it will work if updated to 1.02 version and properly cracked thanks to the MyTH crack scene group)

This is yet another game to add to my “deserves and remake and won’t have” list. Too bad it ran mostly unnoticed, since Electronic Arts will never do something similar again. In golf games we recently had Golf Story (Sidebar Games, 2017) in Nintendo Switch, and in the business management gameplay it could be compared to Theme Hospital (Bullfrog, 1997). There’s no big deal after even after all these years.